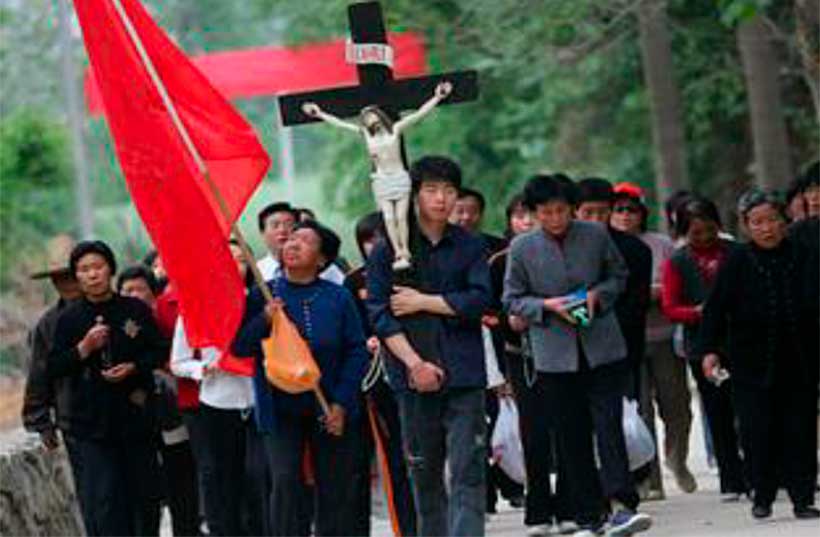 For Catholics in Cina

The Salesians arrived in China in 1906. Despite difficulties, persecution and martyrdom, the Salesian Family became Chinese and continued its educational and evangelizing work. We pray that the Holy Spirit will enlighten and strengthen it.

Many greetings from Valdocco, in full CG28. We present some layers of the Rector Major's Report to CG 28.

The missionary reality of the Congregation is truly great and beautiful. The contexts and the circumstances in which we share our life and mission with different peoples and ethnic groups are very rich, but generally speaking, in my opin-ion, not much known. That is why I thought it would be very interesting to offer the following information to all the members of this Chapter Assembly.

Right now, the Congregation is present in 134 countries: 43 in Africa, 24 in America, 29 in Asia, 32 in Europe and 6 in Oceania. For the time being, our presence has been suspended in Yemen, where our confrere, Fr. Tom Uzhunnalil, was kidnapped for 557 days. We have closed our presence in two countries: Iran and Andorra. At the same time, we have established new presences in two other countries: Malaysia and Gambia. And we have received requests to open new communities in Afghani-stan, Algeria, Guinea-Bissau, Kazakhstan, Iraq, Sweden, São Tomé and Príncipe, Somalia, Vanuatu.

What I wanted to present to you, dear confreres, is a “photograph” of the beautiful missionary reality of our Congregation. Between those who continue this reality today and those who laid the founda-tion, we can count more than 10,400 Salesian missionaries ad gentes, starting from the first mission-ary expedition of Don Bosco in 1875 to the last one we have just witnessed, viz. the 150th. A number of times our Sisters, the Daughters of Mary Help of Christians, have left together with us, often in order to carry out a complementary missionary activity.

These missionaries, both men and women, by the grace of God and the action of the Spirit, have sowed and planted the Salesian charism of Don Bosco which has grown in the five continents. Don Bosco too nourished the hope of becoming a missionary. That thought never left him. It was the great ideal he had, and he realized it through his sons and daughters. We have certainly been missionaries and “Don Bosco’s successors, faithful to the spirit of the Founder, have always made a special effort with regard to the missionary activity of the Congregation.” I can assure you that we too will continue to do so.

From sweets to the missions

I was studying in the Salesian college in Canlubang (FIN) when I encountered Fr. George Schwarz, SDB, an elderly German missionary who was in-charge of the science laboratory of our school. I learned he was strict so I was afraid to approach him. One Sunday morning, as I was preparing to serve mass in the college chapel, I saw a pack of candies and chocolates flying towards my face. It hit directly on my nose. It was coming from Fr. George. Scratching my head, I looked at him. With a smile he told me: “Have some candies to make you sweet!” From that time on, I went to him for confessions, served his masses, did many experiments in his laboratory and learned about his beauti-ful mission in China and in the Philippines. He inspired me to be a Salesian and later I prayed to be like him, a missionary!

I was a formator in the postnovitate when I personally handed my letter to Fr. Angel Fernandez, SDB. It was a long seven-year journey of discerning since I received an invitation during practical training.

There were many challenges along the journey even before I arrived in my destination. After the Christ-mas eve mass in the generalate in Pisana, I received the sad news that my father passed away. Like Don Bosco, Fr. Angel was there to console. Known to many Salesians, my father used to hear daily mass in the Salesian college chapel everyday since my formation years until the day before he died. Now his son-missionary has a prayer warrior in heaven.

In 2017, I arrived in the Province of Manaus without knowing any Portuguese, a big challenge for a neophyte. Thanks be to God, our provincial asked an elderly Salesian sister to tutor me in my first language immersion. To work in a remote city is another challenge since I grew up in big cities back home. Moreover, adjusting to the culture and manner of working was also tiring especially when many things seem incomprehensible.

Tiredness and homesickness goes to the background when we see students improving their behavior, when they share their growth experience in the Salesian youth center, when they became more participa-tive in the parish and even when I am able to sit beside a student to listen to their challenges and difficulties. Looking at almost three years in the missions and putting God first, I saw myself becoming a better Salesian every day, maturing in my vocation, and growing in holiness even though the journey was not smooth.

To our young confreres who are feeling the call to be a missionary, do not be afraid to take a leap of faith because for sure God is always there to help and guide you. God blesses those who are “patient, patient and patient” to embrace a life of challenges and sacrifice for the young.

The Venerable Augustus Hlond (1881-1948), Salesian Cardinal and Primate of Poland, strong in his faith, just as he had defended the Polish people from the horrors of Nazism, so with pastoral vigour he continued to defend them from Communist atheism, doing his best to protect the oppressed, to resolve social questions, to comfort and help the breadless and homeless. In a pastoral letter of 1932 he wrote: "Catholics must therefore not only take part in elections, in order to send honest men of Catholic spirit to the legislative bodies, but it is still their duty to enter personally into the government, the House, the Senate, the political and municipal administration. They will not be there as official representatives of the Church, but as citizens and politicians who govern according to Catholic principles".