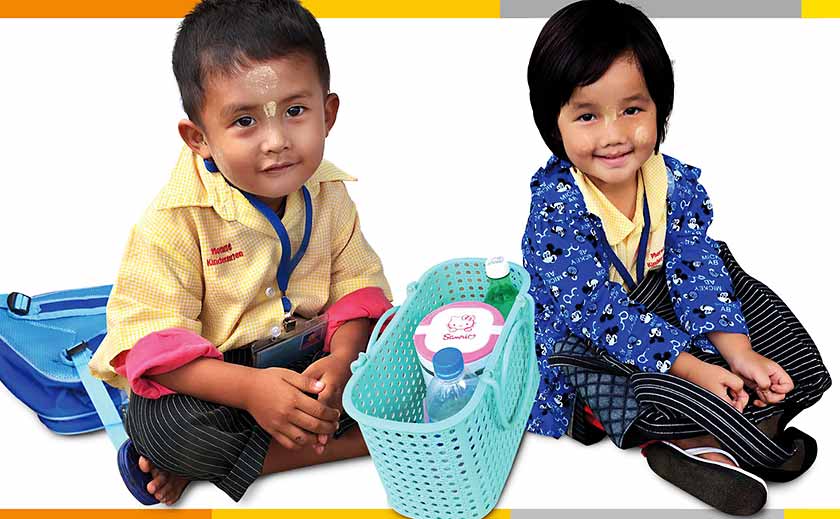 For the Salesian presence in both, Church and society in Myanmar

Let us pray for the Church, that She may receive from the Holy Spirit the grace and strength to reform herself in the light of the Gospel.

Throughout a year-and-a-half of the pandemic, we have seen thousands of members and friends of the Salesian Family engaged in numerous acts of solidarity with their less fortunate brothers and sisters. We look at these concrete deeds with our eyes of faith. The people of God remain faithful to the mandate received from their Master: Go, preach the Good News to the whole world!

Obeying the teaching of the Master and following in His footsteps, the missionary–disci-ples of Christ bear within them-selves the supernatural force that conquers all tragic events in human history. His message and risen life won the hearts of people: Take courage! I have overcome the world.

May we encourage one another to dedicate our life and work to this beautiful and noble cause.

Through the Sacrament of Baptism, all Christians are part of the people of God and share in the mission of the Church. Every lay person, together with consecrated women and men and ordained ministers, is co-responsible for the Church’s mission.

The laity exercise co-responsibility in the Church, not merely being ‘collaborators of priests’ rather, as ‘co-responsible’ for the Church’s being and acting through their concern for the life and mission of the Church. As yeast leavens bread from within, so lay people are called to bring Christ to the world from within; to evangelize it from the inside out.

Thus, being an active Catholic lay person does not only mean involvement in the lay ministries. Unlike the clergy and consecrated men and women, the privileged field of the laity is, in a sense, outside the Church: taking courageous and prophetic stands in the face of the corruption and structures of sin in our present society and imbuing its social, political and economic sectors with Christian values.

We ought to remember that the lay vocation is devalued when clergy and consecrated people act and live like lay people; when lay people are treated as inferior; or by charging them with tasks and characteristics proper to the clergy. Pope Francis warned of a ‘double sin’ of clericalism: one form is when priests clericalize the Church. But another form is when the laity ask to be clericalized!

As Salesians and lay people, we are co-responsible within the Church to fulfil its mission to evangelise (Mt 28:19-20) especially through our primary missionary task of proclaiming the Gospel to the young. We offer them an opportunity not to ‘have more’ but to ‘be more’ by awakening their conscience through the Gospel.

Living Don Bosco’s missionary spirit means moving from considering lay people as mere collaborators, to partners in mission. By forming lay mission partners, we build up the local Church and enrich it with Don Bosco’s charism.

FOR REFLECTION AND SHARING

MYANMAR – THE YOUNG UNDER CONSTANT THREAT

Father¬*, how do the people in Myanmar – mainly Buddhist country – see the Catholic Church in the present unstable political situation?

The repeated call of the Holy Father for peace and reconciliation, especially his appeal to end violence and return to democracy, is very much appreciated by the people and many have expressed their gratitude to the Holy Father. From the very beginning the people of Myanmar do not see the Catholic Church as a threat. Many see Catholics as loving, peaceable and ethical citizens. The visit of the Holy Father to Myanmar in 2017 made a great impact in the country.

In what ways are Salesians present with and among the young people?

At the moment, young people are seen by the army as their enemies, the greatest threat to them. It is already five months since the coup. Yet, young people are still on the streets everyday opposing the coup. Despite brutal suppression and arbitrary arrests, many young people have gone to the EAO (Ethnic Armed Organizations) to undergo basic military training. Many have completed this training and have returned to the cities. They group together and call themselves the PDF (People’s Defence Force). So, young people live under constant threat and insecurity.

The army reopened the Universities; however, it was a total failure because over 85% of students did not enrol. High schools were reopened at the beginning of June; there has only been below 20% enrolment.

We take risks to create a safe place for the young. Although it is very risky to keep young people in our houses, we still let them be with us. We opened small clinics in our presences and offer basic medical care. We also distribute food to the needy in our localities

During this month of August, we want to pray for Myanmar. What should we pray for specifically?

* Note: for the security reason we do not mention the name of the author of this article.