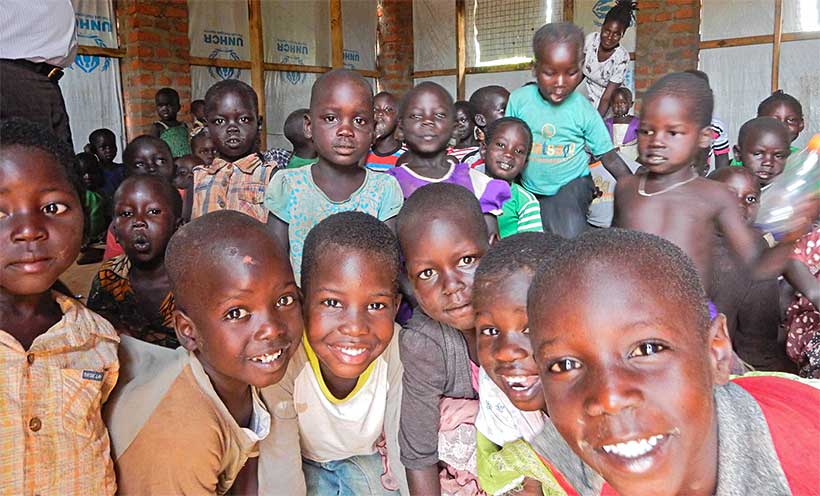 For migrants and refugees

That God may protect everyone from poverty, trafficking and indifference.

The Congregation, on the five continents, is engaged with young peo-ple in a situation of human mobility. Let us pray for these young peo-ple, for their families and for all those who are engaged in the service of welcome, accompaniment, promotion, insertion and evangelization.

T he words of the Rector Major are still ringing in our ears – the words of his latest Missionary Appeal (December 8, 2019, in http://www.infoans.org). The General Chapter and the time of Lent, both of which we begin this month of February, offer us great opportunities to listen better, even to this missionary call ad gentes.

"This is the identity of our Congregation," Fr. Angel told us in his Appeal: "Don Bosco carried a great missionary passion in his heart." For this reason, "excellent missionary confreres of ours went everywhere to participate in the proclamation of the Gospel, the Word of God and the education of youngsters".

It is true that even, "today they continue to call us everywhere." "The Salesian mission In the world awaits a large number of missionaries who have this desire to do good in the name of the Lord and for the benefit of children." We know it, and the Master reminds us once again that, "The harvest is great, the labourers are few." Indigenous minorities in Latin America await us; so do refugees and displaced persons, particularly in Africa; young people in Muslim-majority countries, as well as the Orthodox; young prisoners of a secularism that kills; the beneficiaries of our Project Europe…. Remember that Don Bosco's successor concludes his Appeal saying, "I invite you to listen. I pray for you. I'm waiting for your letters." So do I!

CG28. Which Salesians for today's youth?

God gave a job he didn’t give to ohters

St . John Henry Newman once said, "God created me to serve him. He gave me a job he didn't give to others”. I have my mission. I may never under-stand him in this life, but yes, in the next. I'm a link in a chain, a connecting link between people...." In 2017, I was sent by the Rector Major as a missionary to the Province of Great Britain. Going back in time, the first Salesian I met was Fr. Thomas Myladoor, who had a friendly and fatherly approach, and a cheerful smile. He always reminded me how to be a Salesian. Every time I went to confess to him, he spoke to me of the missions and gave me a "mantra". I was to say three Hail Mary’s for the mission. He always assured me of his prayers and offered me his support. We became very close friends. He often talked about the mission and so, I thought about being a missionary. God had already designed a plan for me, and I completely trusted him. I often prayed about my missionary vocation. While in formation, I was very involved in 'missionary animation' and encouraged my confreres to pray for the missions. I met several missionaries in my Province and asked them for advice. They suggested that it was a good time to become a missionary. So, I applied and I left as a missionary while in practical training.

When I arrived in the Province of Great Britain, I felt blessed right away because the Rector supported me a lot, the Provincial always gave me a fatherly ear, and I felt the warmth and love of my confreres. All this helped me to integrate and gave me confidence in the mission that was entrusted to me. Every challenge a missionary faces is an opportunity given by God to learn and to grow. It is essential, as a missionary, to have a burning love of God if we are to realize the mission. It is not enough to reflect; we need to pray. As a missionary, I would say that I have no problems; but, yes I have opportunities to learn from. My greatest joy as a missionary in this Province is to see the young people so full of vitality, positivity, openness and their spirit of collaboration with Salesians. As the next Chapter asks us, we must be people who welcome and love, appreciating the commitment that young people bring with them.

What is the secret that has made me serene as a missionary in this Province? Those three "Hail Mary’s" that I say before I sleep; because, I know that what we do is the mission of God and of our Mother. They, no doubt, guide and care for all those who aspire to be missionaries. I always rely on her and always experience her presence. She never gives up on any situation. She's our mother, and she would never refuse anything good to her children who ask her. This is my counsel and my prayer for all those who want to offer themselves as missionaries. Remember that "those who enter a Salesian house are brought there by our Mother."

The Servant of God, Matilde Salem (1904-1961) Syrian of Aleppo, after she was widowed, devoted herself totally to her neighbour, with great love. Her family were the poor young people of her city. She endowed the great capital city with an institution for poor children and entrusted it to the Salesians. She willed away all her possessions to various charitable works, so that she could say: "I die in a house that no longer belongs to me."