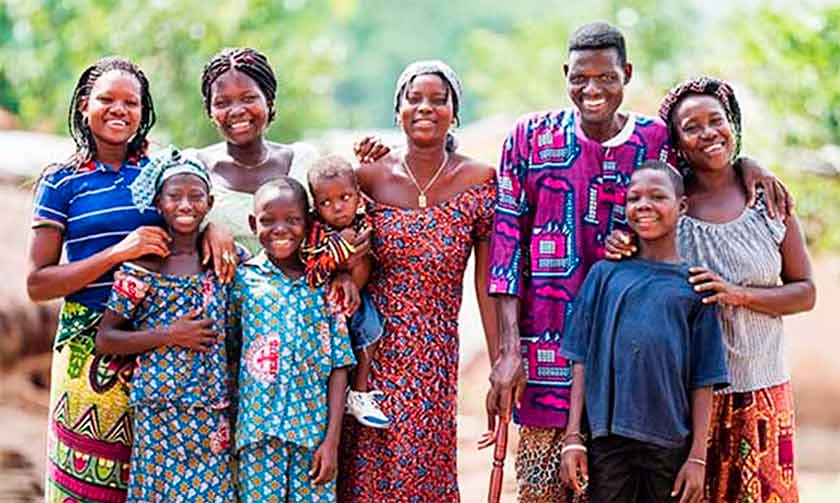 For Families in Africa

That they may be accompanied with love, respect and guidance

One of Africa's greatest treasures is the importance accorded to the family. Let us pray that we may educate young people to preserve the rich traditions of family life. May they form families imbued with the light of the Gospel.

Dear friends of the Salesian missions,

We are still in the grip of Covid-19. In the north-ern hemisphere, July is a busy month when everyone takes time to enjoy summer with family and friends. In the southern hemisphere, July is the middle of the scholastic year when schools take a mid-year break from their hectic activities. In the tropics, schools are starting their new year. Wherever we are, this July will certainly not be like those we have known in the past. As the lockdown is gradually eased, policymakers and experts are discussing how to avoid a new wave of the virus. Can we still go back to schools, restaurants and offices, and keep the coronavirus away? Experts warn that we may have to continue living at least partially isolated for many months to come. We will still be discouraged from touching our friends and, in some cases, even members of our family. Face mask, hand sanitizer and other personal protective equipment will be with us for quite some time.

Many call it the 'new normal'. No one is yet clear yet how it is going to last. This 'new normal' will depend on various unknowns because the world as we know it is dissolving. After it awaits us a new world, whose shape we can at least imagine. Indeed, we need to ask ourselves why we would even want to return to the pre-COVID-19 world. I would wish that the 'new normal' would mean moving away from social inequality, environmental degradation and economic greed to something better. I would like to think that our 'new normal' would be deeply permeated by Don Bosco's missionary spirit: abandoning the complacent attitude that says: 'We have always done this'; rethinking with courage and creativity our objectives, structures, style and methods of evangelization; walking together as partners, networking, coordinating, fostering educational-pastoral discernment (Evangelii Gaudium, 33). May being inflamed by missionary zeal be our 'new normal'!

History of the Salesian Missions - 2

From Don Rua to Don Ricceri. With Don Rua, the expansion in Europe and the Middle East continued and missionary expeditions expanded to almost all of America. Fascinating presences are opened in India and China. Under his successors, missionary expansion continued in all five continents. Always at the service of the Church, Salesians assumed various ecclesiasti-cal jurisdictions; in Equatorial Amazonia: the Apostolic Vicariate (VA) of Méndez (1892); in Brazilian Amazonia: the Prelatures of Guiratinga,(1924), Rio Negro, Brazil (1925), Porto Velho (1925), Humaità, (1949); in Venezuelan Amazonia: VA of Puerto Ayacucho (1964). Also, the VA of Chaco Paraguayo (1948) and the Prelature of Mixe, Mexico (1966). In Africa, the diocese of Sakania, Zaire (1959). In India, the Archdiocese of Shillong-Guwahati (1969) and the dioceses of Krishnagar (1934), Dibrugarh (1951), Tura (1973), Kohima-Imphal (1973). Also in Asia: the Diocese of Oita, Japan (1961) and Surat-Thani Thai-land (1969); and the Apostolic Prefecture of Lashio, Burma (1975). We need to take special note of the miraculously fruitful mission of North East India during this period. After the Vatican Council II, with Fr Ricceri, the missions were updated through a renewed ecclesiology and missiology.

Project Africa. With Fr Viganò, at GC21 (1978), “Project Africa” was launched, involving the entire Congregation and also lay missionary volunteers. It became the most important missionary movement of the Church after Vatican Council II. There dawned also a new missionary spring for the Congregation. Salesian presences grew from 14 countries of Africa to 43 countries (2020). It has grown greatly in vitality, and aroused many missionary vocations for the whole world.

Project Europe Today and the “New Frontiers”. Don Chávez officially launched a different missionary project at GC26 (2008): "Project Europe”. In a context that needs evangelization and a new evangeliza-tion, young confreres from all over the Congregation go "ad gentes", integrating themselves into the provinces of Europe to contribute to the growth of Don Bosco's charism. Today, in a globalised and transversally multicultural and multi-religious world, the Salesian mission is more urgent than ever. “New Frontiers” are not only geographical, but socio-cultural, such as among migrants and refugees.

I am a part of the dream of our father, Don Bosco

I had this restlessness about becoming a missionary long before the idea of becoming a Salesian came to me. However, it was in the novitiate that this desire made its presence persistent, but already from a Salesian point of view. I manifested to the Master what I felt God was asking of me. I also recognized that I needed to go through a process, get rooted in Jesus Christ, get purified from some things within me and continue in my normal initial formation.

What was very precious and important was that I was able to count on people to help me in my discernment. It meant being able to glimpse and confront God's voice in all sincerity. It made me keep my feet on the ground, while knowing also that God was knocking at the door of my life for something special.

A challenge I faced in my missionary vocation was that of learning to abandon certain paradigms; to open myself to the freshness of God who was present where I was sent, despite my weaknesses, to be a sign and bearer of His love. Another element was to confront the other side of the coin of a “first world” country. I met young people excluded from the educational system. The society rejects some of them because of their past. They bear scars on their body and soul. No one wants to bet on them, to give them another chance. Only a few shepherds are willing to walk along with this population that is so delicate, but also so full of dreams and goals to be achieved.

In my vocation I experience the great joy of recognizing and feeling that I am part of a dream, a dream of our father Don Bosco, which has become a reality over the years.

When I landed in my mission land, two things impressed me. They are:

One must know how to abandon oneself completely into the hands of God. It needs, beyond all doubt, a process of discernment along with a companion. If God is the source of our interest, God will sustain it and in God it will bear fruit. Only, trust and also work hard on what God asks of you.

Blessed Michael Rua (1837-1910), Don Bosco's first successor. In the Salesian Bulletin of January 1902 he wrote to the Cooperators as follows: "First of all, I feel it my duty to ask you to note that we have, everywhere this year, continued to give multitudes of young people entrusted to us, that civil and religious instruction which will give them happiness in life. There are several hundred thousand young people in various parts of the world who enjoy the benefit of your charity towards the children of Don Bosco; even those who live in their families but attend our day and evening schools, or our festive Oratories. Oh! how dear it is to us that so many of these young people who, if abandoned to themselves would perhaps have become one day the unwanted of their community, now grow up to be good and honest citizens. There even are many who, chosen by God, abandon the world to become apostles among their companions, or join the Salesian family to do to others what others have done for them.”