A Loving Mother to us

SOLEMNITY OF MARY HELP OF CHRISTIANS 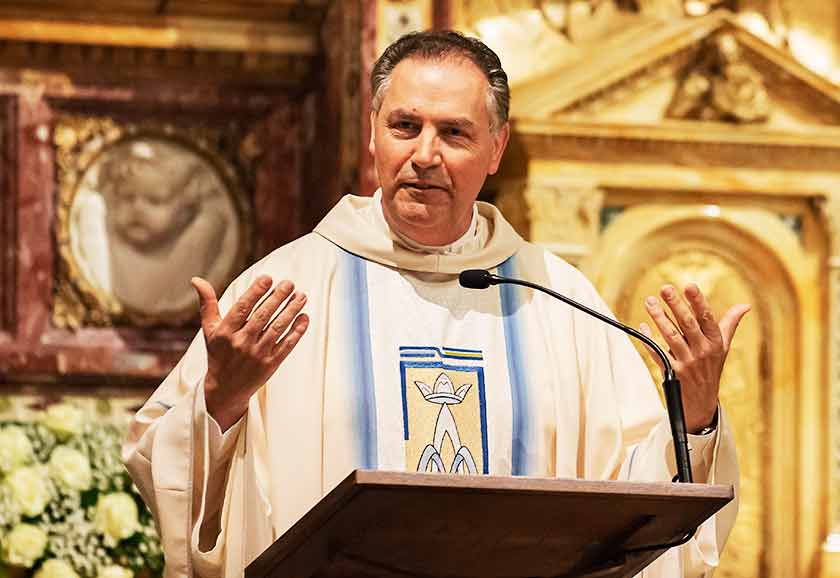 Welcome to all of you, dear brothers and sisters devoted to Mary Help of Christians all over the world and gathered here in Valdocco, Turin, from this Basilica of Mary Help of Christians which the Virgin Mary wanted and asked Don Bosco to build, so that the glory which always leads to the salvation and fullness of life with her Son Jesus Christ may emanate from her house.

One year ago we celebrated the feast of Mary Help of Christians around a world struck down by this pandemic that has brought so much suffering to humanity and which brought out once again both the best and the worst of our humanity, characterised by so many expressions of selfishness found in so many nations of the world. We see this in the distribution of the anti-COVID vaccines: the poorest are those who, once again, do not have access to it. Perhaps because their governments are focused on other urgent matters. That may be true but it does not change the situation: the poor, once again are the ones who, in every circumstance often recorded by history, suffer the most. This seems to belong to our human condition and we must, therefore, ask for the grace that the Gospel and God's love may continue to transform our hearts, which are sometimes made of stone, into hearts of flesh – as God revealed many centuries ago through the prophet Ezekiel.

One year on, the disease continues to affect many people. And although in some places we are beginning to see light at the end of the tunnel, in others the situation is still very serious and harrowing. Today as in the past, we turn our gaze to Her, our Mother, our Help in difficult times, and we direct our prayers to her so that they may reach the Lord.

In this homily, I would like to emphasise looking. The whole of biblical revelation is permeated by this powerful message, which places great value on looking and contemplating.

When creating the world God sees that what he has done is good, and that all manner of things are good. In the very creation, God looked and saw that he had made man in his image and likeness. God also saw that man needed a companion with the same dignity and circumstances, and created woman. And God saw that she was good.

Sometimes with a deep gaze, sometimes with compassion, with a gaze that penetrated the heart, Jesus, too, looked, and in that looking and contemplating he reached the purest part of every heart: that of his friends, that of the mother who had lost her only son, that of the rich young man who had abandoned him and turned away because he did not want to lose his wealth.

Also, Mary looked at things with a sensitive and attentive gaze. This gaze made her realise the imminent disaster that was approaching for these young newlyweds, and, to spare them the shame that was about to come, with the tenderness and authority of a Mother she asked her Son to do what was in His power.

How important this attentive gaze was and how important is this gaze, linked to a sensitive and open heart and to contemplation, for our lives today. And today, on the feast of Mary Help of Christians, we need, perhaps more than at other times, to turn our gaze to her, so that by looking at her and speaking to her with our hearts we can feel that once again she is saying to us: “Why are you afraid, am I who are your mother, not here with you?”

Our beloved Don Bosco, who was a giant of spiritual pedagogy, that is, a master in the art of accompanying his boys on their journey and in their encounter with Jesus and with his Mother Mary – first as the ‘Consolata’ (Consoler), then as Mary Immaculate and finally as Help of Christians – acted just like a master of the spirit: he made them see that they could communicate with Her, as a son does with his mother. He knew how to make his youngsters, through looking, contemplating, kneeling before the statue of the Virgin, or singing the hymn they had learned, feel deeply in their hearts that they were looking at their Mother and that their Mother was looking at them and speaking to their hearts.

There is a valuable story, a dream of Don Bosco's, which we heard during the days of this novena and which goes like this: “On the first of January 1866 Don Bosco told the Oratory that he had dreamt of a terrible flood, and that he had taken refuge with his youngsters on a large raft. When everyone was in the boat,” he recounts, “I took charge and said: ‘Mary is the Star of the Sea. She does not abandon those who trust in her.’ After navigation full of dangers, the raft landed on a beach where a statue of Mary Help of Christians stood. All the young people went forward to thank the Heavenly Virgin for her many favours. While they were looking at the statue... some exclaimed: ‘Our Lady is moving her eyes!’ Shortly afterwards came a second cry: ‘Our Lady is moving her hands!’ Tears were flowing with emotion down our cheeks. ‘Our Lady is moving her lips!’ said others. There was a deep silence. Our Lady opened her mouth and in a soft voice said: ‘If you will be devoted children to me, I will be a merciful mother to you.’”

This is the great gift that the Lord offers us on this Solemnity of Mary Help of Christians, after the descent of the Holy Spirit: the certainty of knowing that if we are her devoted children, she will always be A LOVING MOTHER TO US.

This certainty makes us aware of the great gift of having a MOTHER:

à It is the gift of perceiving strongly in our hearts that it is not a matter of more or less beautiful ideas in our heads, but of feeling in the depths of our being that She the Mother is and always will be Mother of each one of us, a Mother who takes us by the hand, always, but especially in difficult moments.

May the blessing of your beloved Son radiate out from here today, from this House of yours, and reach out to the whole world, to the entire Church  through your Motherly intercession. Amen.