Rector Major's Homily for the 4th Sunday of Ordinary Time B 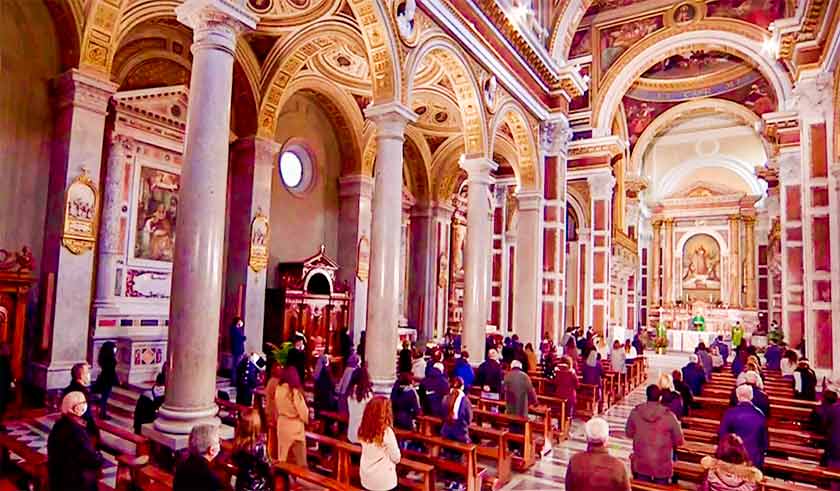 First of all a greeting to the many people who are following us on TV, thanks to Rai Radiotelevisione Italiana who are transmitting this Eucharist on the 4th Sunday of Ordinary Time.

And with deep affection I greet families, especially the elderly and the sick who have joined us for this occasion.

We are celebrating the Holy Mass in the Basilica of the sacred Heart in Rome: a place that speaks so much of St John Bosco on this his feast day. Don Bosco is the Saint of the young, the Father and Teacher of the young throughout the world as Saint John Paul II declared him to be.

Don Bosco celebrated the Eucharist in this minor Basilica on 17 May 1887, the day after the church was consecrated and seven months before he died, as we know, on the morning of 31 January 1888. The elderly founder of the Salesian family wept in this Basilica, so moved was he as he stood before the altar of Mary Help of Christians, and he interrupted his Mass sixteen times to weep, as he finally understood through a particular grace from on high, that it was She, Mary Help of Christians, who had truly done everything throughout his life: "She has done it all."

On this Sunday today, the Word of God resonates magnificently, highlighting the authority with which Jesus the Lord spoke to his contemporaries and still speaks to us today.

His was a new way of teaching with authority.

This was how Jesus was perceived by the people, the simple folk, and this was how he was praised by the people who saw the contrast with the learned, experts in the Mosaic law of the time. Jesus is given the “authority” that was denied to the learned. His teaching is described as “new”, in contrast to the experts who were seen as “old”, passé.

Jesus is a layman without any “legal authorisation” to teach. Nevertheless he acts with authority, in the interests of those who suffer, the poor and the marginalised, while those who had the legal authority to teach were limiting themselves to a sterile and ideological practice that did not deal with or even touch the lives of the people.

Put in other words, the people were drawn to him because he spoke to them about a God who was very close, who was proclaimed in such a familiar and direct way that even the simplest of the people could understand him. God was “close at hand”. God was perceived by them as he also is by each of us as being in our daily lives, in the midst of people, concerned and occupied with our things, our joys and our problems. He was not in a distant and faraway heaven, accessible only to someone who had studied and could read and explore the Law of Moses, the Word of God. On the contrary, the Lord announced the Good News of the Gospel to the simple folk, the least, the poorest of them and those who had been discarded by society of that time. So the people understood and accepted Him and His message with profound joy.

Jesus wanted to bring God to the simple people and so he used simple language, told parables, so that the lowliest ones could understand him and recognise that God the Father wanted to encounter them.

Jesus proclaimed a God who was on their side, who loved all of his children each in his or her own way. A God who for centuries has been crying out, crying out that there may be no more injustice, no more abuse of the poor. A cry so strong that in the fullness of time it became incarnate through his own Son, the long-awaited Messiah who proclaimed the Kingdom of God and the Good News. Jesus is the good news of God, of God who was caring and close, who was concerned about all his children beginning with the marginalised, the poor, the discarded.

In the Gospel scene we have today, taking place in the synagogue, the law is interpreted precisely and rigorously, but the man who was possessed continues to be controlled by his illness and is crushed by his own sense of powerlessness and dependence. Until Jesus arrives on the scene. After his teaching, Jesus intervenes in real terms, moves to action, which is the best way to helop someone to learn. Jesus had said that God was close to the most disadvantaged and here, right in front of him, there is someone trapped, enslaved, frightened, marginalised, excluded from his own people. Then, God himself heals him through Jesus.

Jesus' behaviour, his words and gestures turn the tables in this setting. The so-called “experts” – the doctors of the law – are silent, but the people know how to discern and understand. Jesus frees and heals, teaches with authority, and what he says and does is “good news”, provoking the people to wonder. While those who have been unmasked and stripped of their power by what he does, either keep quiet or shout out, but they are closed to the truth and even less do they accept God's presence in Jesus. They refuse to encounter God and do not accept the signs of the Kingdom.

Instead, for the  man in question his encounter with Jesus was good news because he came away from it all as a renewed, free, recovered individual able to fit back into his fmaily and into social and religious life. Surely he would not have then let a single day go by without testifying to the people what Jesus had done for him. This is why the Gospel reminds us that "his reputation rapidly spread everywhere".

And today, two thousand years later, what does the Lord say to us in the face of this fact, on an ordinary Sunday, on this Salesian feast of the Family of Don Bosco?

Certainly he is telling us and reminding us that God loves us, that he continues to love each of his sons and daughters. He is telling us not to be afraid of accepting his Word and allowing ourselves to be touched by it in the depths of our heart, just as happened to that man. And at the same time he is inviting us to testify through our lives to the simple but wonderful message of the good that God is doing in each of us.

Our faith deserves to be lived in profound joy and hope. And our lives deserve to be lived in the certainty that our God, the Lord of life, accompanies our every step.

This is what Don Bosco did and taught to all his young people, to his Salesian family: he left us with the great task of continuing to help boys and girls to discover in their daily lives that God loves them, that he is a good Father, and that their life is a gift to be lived joyfully. Today, like yesterday, there are people around us and so many young people who are bound up with the chains of “so many devils”, wearing the face of exploitation, abuse, unworthy and inhumane treatment.

All of our brothers and sisters, you and I, need to help loosen these many chains through our prayer or with our charity, by listening respectfully or with a dignified gaze on every mistreated individual, every imprisoned teenager or youth, so that the strong and authoritative words spoken by Jesus can be for them, for their good. They are words that make one grow and live in peace, because they are an expression of the liberation that Jesus came to bring: "Get out, go away, set free this child of mine whom God my Father and I love so much."