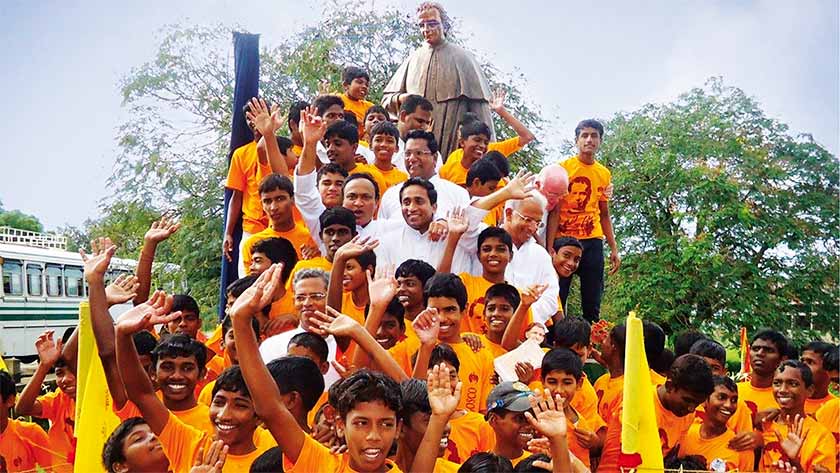 Closeness, creativity, love: this is how the Salesian response has been spelt out during the Pandemic. Strongly adhering to Pope Francis' magisterium, Don Bosco's family according to the Rector Major, lives through all this today by looking for hope and continuing to form the young to the best of values so they may have a better future

Everything is ready in Turin for the celebrations leading up to 31 January, St John Bosco's feast day, this year live on TV for those who cannot get to their local church for Mass due to the health emergency. The point of reference in Turin will be the Basilica of mary help of Christians at 9.30, where Archbishop Cesare Nosiglia will be the main celebrant, and in Rome it will be the Sacred Heart of Jesus Basilica where the Salesian Rector Major, Fr Ángel Fernández Artime, will celebrate the Mass. We have asked him to look at the world today through the eyes of Don Bosco, "father and teacher of the young", and to reflect on major issues like fellowship, education, the young and the challenge of the pandemic that has also deeply affected Salesian works in 132 countries across 5 continents. More than 100 Salesians have died, yet even through all this, as the Pope has also asked of us, has arisen an experience so typically Salesian in its features: creativity, closeness and a smile.

Listen now to the interview with Fr Ángel Fernández Artime

Q. How does today's situation challenge Salesian spirituality? What are the priorities that motivate the Salesians during this financial crisis, the isolation resulting from the pandemic, and in new forms of communication, including religious forms?

A. - Over this past year we have attempted to respond to the situation before us, taking our inspiration above all from our charism, starting from the guarantee of our presence, undoubtedly applying the rules that need to be respected and applied responsibly today. I have always told our priests, over this time, that nothing should force us to close in on oourselves, meaning we should not forgo creativity and remaining close to our youngsters' families. So closeness, through practical initiatives address to thos in greater difficulty. Then secondly, as is always the case at the beginning of the year, we give ourselves a direction to take: for 2021 this is "Moved by hope". So guided by Pope Francis and his words as well, we would like to point to hope, otherwise life loses its energy and being in touch with reality.

Q. Your missionary presence in the world is a thread that weaves together fellowship (fraternity) and charity everywhere, something very close to Francis' keyword "Frtaernity or ffellowship". This has been the year of the encyclical "Fratelli Tutti" and soon it will be two years since the Abu Dhabi Declaration. What value do you give, as sons of Don Bosco, to the word "Fraternity or fellowship"?

A. - You can imagine how we share and hold to the Pope's magisterium with all our heart, both because of its pastoral freshness and because of Don Bosco's Salesian tradition of always supporting the Pope, every Pope. So it is in this spirit that we have taken this idea of Fraternity/fellowship to heart. For us it is the door that opens hearts and, in educational settings, allows us to sow friendship and develop relationships of respect and acceptance - prime qualities of our charism -but it also allows us to forever seek justice as the educators that we are. For us, "fellowship" is an expression of solidarity and charity, and being able to speak to the hearts of the young, telling them that a better world is possible, a more just an not just a utopian world. We believe that we can build this world, day by day. So the term has become ours and we shpae it by translating it into an educational meaning, one that takes shape anywhere, and one that even works successfully in places where Catholics are in the minority, because this is not just about religious language.

Q. The young and education, the Salesian field par excellence. How do you interpret the hardships of these months: from street demonstratnions during lockdown, to the young who have become addicted to videogames and social media which has now become our life companion, and even including violence against women which has seen teenagers just as brutally implicated?

A. - I like your question very much, because the situation around us affects me very much. I hear of young people who are victims of video games, or rather slaves of the net, or who become violent despite being very young. I see so many situations of risk that remind me of Don Bosco's Turin, albeit with different cultural elements. So what help, what response do we give? One of the characteristics of educating with Salesian eyes is closeness to families, which are often broken, and closeness to young people where they are, in their world. To be an educative presence in their midst, a friendly educative presence, just as Don Bosco did at Valdocco by going out into the streets and making friends with the boys he met and then offering them activities that involved them in helping the poor. It is important to involve young people especially who do not know what to do with their lives, who do not have a clear path: it is a question of offering them activities for the poor, activities that put them in contact with realities of friendship and community, such as an oratory or a youth centre. I experience this every day here in Rome where I am.  In one of the first Don Bosco houses, at Sacro Cuore, there are many young people, boys and girls, who go out in the evenings to bring food, sandwiches, blankets and human assistance to those on the streets. Well, what I learn is this: when we offer young people high ideals and beautiful initiatives, a world opens up for them that is so interesting and special that other paths are no longer possible. So, let's make positive proposals to them, when all they experience around them are negative experiences.

A. - My reply is a humble one, offering you our modest contribution. We maintain, and this is a truth that goes without quesiton, that the most effective tool today is education. this is the great investment today of nations and peoples, that guarantees a better and more cohesive society. And let me say this loudly and clearly. As a Salesian Family we believe in the tool that is education and we fully adhere to the "Global Pact for education" launched by the Pope, who is offering a new perspective, an openness to others that is the exact opposite of what we see today. This Pact offers a new way of thinking, and thinking about ourselves: sowing this today means reaping its benefits in the future. The Pact looks very much at human relations and puts them at the centre, and this cannot be lost. A Europe that thinks only in economic terms will sooner or later have major problems. A Europe that instead puts rights and quality human relations at the centre will reap rewards in terms of guarantees, democracy, humanity and respect. Once again I quote Don Bosco: when he went to ask for help for his school and to feed his children, he told the people of Turin: "If you don't help these children today, tomorrow they will come and ask you for money by force, threatening you". Of course it's a figurative way of putting it, but it means that education is a way of guaranteeing something different, something more just and better, and I think we all know that. That's why I say that adhering to this Pact the Pope wants seems to me a brilliant idea and a very interesting opportunity which we fully subscribe to

Q. During the pandemic which has affected the Salesian Family as it has the rest of the world, the Pope has never left us without words of guidance and his way of interpreting things. What value do you ascribe to the Papal Magisterium in this dramatic context and how do you experience it?

A. -Dueing this time of the pandemic I can tell you that we too have been very much affected throughout the missions we have around the world. The yragedy has befallen us too without distinction. As Don Bosco's Family we have so far lost 102 Salesians, especially in europe and the Americas and I am not just talking about the elderly. Often we have lost young confreres full of joy and at the height of their ministry. So it has been very painful for us, just as it has been for families who have lost their dear ones and are now living in financial difficulties. The Pope's magisterium has been a guide for us in this: a most authoritative and heeded one. So the pandemic has been painful for us but also something that has driven us to journey on, seeking light in darkness. It has been a time od education creativity, and of being close to those most affected. Solidarity and charity have been brought into play in a very tangible way. From the very beginning we said to ourselves: how can we respond to Covid in a Salesian way? And so we shared many experiences and services for those who have less, and wonderful things came about. In particular, from all over the world we managed to collect 9 million euro to be distributed in 63 countries with 143 small projects to support local circumstances. This was a simple way of saying: let's not only think about ourselves and our health, but, as Don Bosco did when he went out into the streets to look for children to help, let's respond with the same strength. So creativity and courage! This is our contribution today.