BS 2021-02: Lord, help me never stop being amazed or become inured to reality

Lord, help me never stop being amazed or become inured to reality 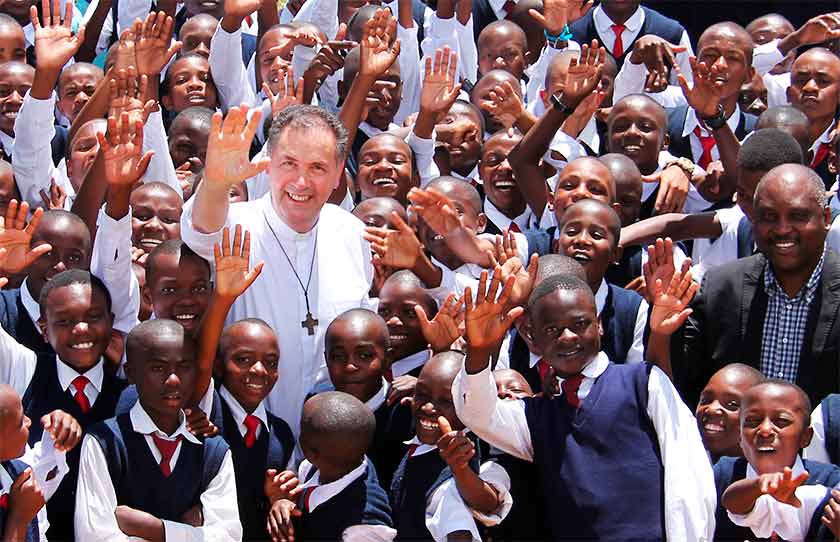 «This is my prayer after having visited over 100 nations around the world where there are Salesian presences...
and where I came to know realities that are so incredible, fascinating, precious, and often times so painful».

Cordial greetings, my friends, readers of the Salesian Bulletin. Surely, we have begun 2021 with a strong desire that it be a better year than the previous one. Perhaps there is still much fear, but perhaps we also feel deep down that we have to cultivate Hope because it does us good and helps us to live better and more meaningful lives.

On the last Sunday of January we celebrated the Feast of Don Bosco. This also took place in a different way from previous years because the pandemic has not yet disappeared and continues to condition our life. Still, even in this situation we have to know how to see the light and the buds of Hope that are present.

It is in this context that I chose these reflections to share with you this month. The title expresses the way in which I have prayed many times throughout these last seven years - and continue to do so. Very often, almost daily, I pray in this way: “Lord, help me never stop being amazed or become inured to reality.” Let me explain what I mean by these words:

In the past six years, before the pandemic, I had the precious yet demanding (as you will readily understand) opportunity to visit over 100 nations around the world where there are Salesian presences. The Salesians of Don Bosco and various branches of the Salesian Family minister in these places. I came to know realities that are so incredible, fascinating, precious, and often times so painful that my daily prayer and my thought upon returning to Rome, was: "Lord, help me never stop being amazed."

I could continue at length giving examples of why I ask Our Lord to help me not to stop being surprised because contemplating these realities raises up in me a sense of awe and wonder and makes me grateful to God, to life, and to those who have done so much for the good of others. Don Bosco's missionary dreams have unfolded and have undoubtedly become reality far beyond what he himself could have imagined. I know that I have been but a witness to these realities, almost like a notary public, during my pastoral visits but I am grateful for having had the opportunity to witness them firsthand.

At the same time, I am afraid of becoming inured to many realities or just curious about, e.g., the number of deaths today from COVID when there are so many stories of pain (and quite often stories of wonderful lives) behind those deaths. I don't want to become immune to the pain caused by refugees trying to reach a new land and ending up dead in the Mediterranean Sea or on the borders and rivers of various Central American nations.

I don't want the knowledge of the abuse done by the mafias to stop being painful to me for they exploit people, deceiving them with the promise of a better life, and subject them - most often women, children, and teens - to a life of prostitution and abuse with no hope of release.

I don't want to get used to thinking that nothing can be done about this in our societies.

I don't want to be inured when I see lines and lines of people waiting for a plate of food in our big "first world" cities and come to know their very painful stories.

I want to remain sensitive to all these things – as sensitive as one is when touching an infected wound.

Dear readers, this is my simple and humble message to you. I know that many people are greatly aware of these realities and ones just like them. I also know that many of us believe that it is possible to change these situations and work to ensure that the changes happen.

As I continue to wish you a New Year full of Hope, of authentic and true Hope, I also invite you to dream in 2021 and not to give up being surprised by the beauty and incredible things of life and by so many unique stories. At the same time I pray you not “get used to” what should not be.

Thank you for continuing to stand by our side as friends, believing that a better world is always possible and that it is not a distant and unattainable “utopia”.