"Dream and Help Others Dream"

(Pope Francis to the Salesians) 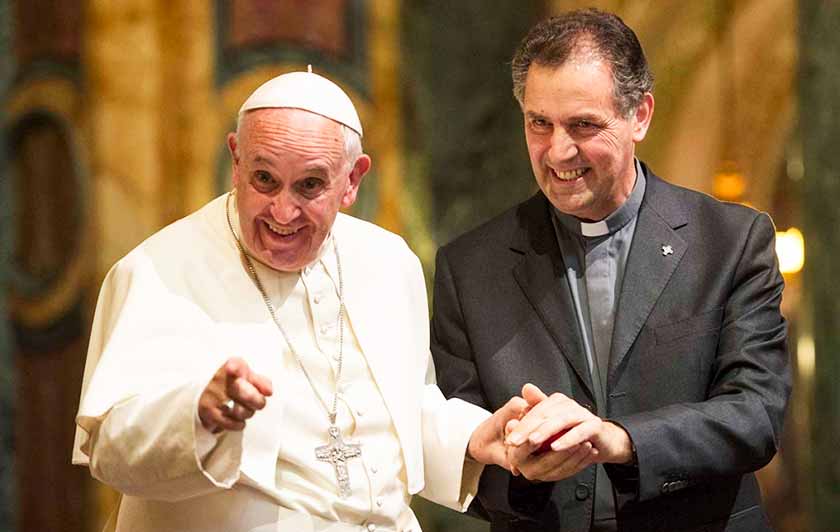 Poor young people if, in addition to all that must be done to survive during this time, we kill, annul, or maim their dreams and their desire to do something great and beautiful with their lives.

Greetings to all of you, friends of Don Bosco’s charism around the world, or readers who may have chanced upon the Salesian Bulletin - the communication tool that Don Bosco himself founded and loved so much. Today’s greeting bears a message filled with the Family Spirit and expressive of wonderful closeness on the part of the Holy Father, Pope Francis, to the entire Salesian Family, even if it was specifically addressed to us, the Salesians of Don Bosco, at the time when we were holding our General Chapter.

The Holy Father, this simple man of God and the most credible leader in the world, who prayed alone in the vast, empty piazza in front of St. Peter’s Basilica on a rainy  and cold afternoon, as night was falling on March 27, 2020; this man of God who prayed for all mankind, which has, perhaps as never before, seemed so Promethean[1] as in the present century, while, at the same time, never so fragile as when stricken with a virus that has paralyzed the planet; this man of God who never before had been so alone when praying and, yet, at the same time, never so accompanied; this same man of God, just three weeks prior had wanted to be present to our General Chapter via a message that, far from formal, was familiar, purposeful, and challenging for the children of Don Bosco.

Among the many significant things that he says to us, Pope Francis ends his message with the following words: "I would like to offer you these words as your ‘Good Night’ – just like those that take place in every Salesian House at the end of the day –  inviting you to dream and to dream big – knowing that all the rest will be given to you in addition. Dream of open, fruitful, and evangelizing Houses capable of allowing the Lord to show very many young people His unconditional love and to permit you to enjoy the beauty to which you were called. Dream… not only for yourselves and for the good of the Congregation but for all the young people who are deprived of the strength, light, and comfort found in friendship with Jesus Christ, deprived of a community of faith that includes them, and deprived of a horizon that holds life and its meaning. Dream… and help others dream!”

What a beautiful challenge this is for the numerous people who are part of Don Bosco’s Family and for so many others who feel a great affinity for this saint who lived for young people, for his boys [and for his girls through the Daughters of Mary Help of Christians of whom Don Bosco also dreamed, and founded, together with St. Mary Domenica Mazzarello, to be the “living monument of his gratitude to Our Lady, Help of Christians”.]

I am neither remaining silent about nor ignoring the pain people have experienced during this grave crisis that the world is living, the serious health crisis due to the pandemic that has already claimed almost 377,000 lives as I write these words. Neither am I ignoring another very serious crisis: the lack of wages and food for tens of millions in the world, with more than 100 million people having lost their jobs in just two months’ time, some of whom have received some State aid, but the majority who have not and who have no other recourse. Nor do I forget the great suffering of families, of children, and of young adults, especially the poorest who are always the most affected by anything that hits our society, even if it seemingly has nothing directly to do with them.

It is precisely because I do not ignore these realities, because I do not look the other way, that I feel a pressing need to make Pope Francis’ words a reality; i.e., to undertake both as a goal and a task to help young people dream, and dream big, because it is possible to dream at the same time as being realistic. Poor young people if, in addition to all that must be done to survive during this time, we kill, annul, or maim their dreams and their desire to do something great and beautiful with their lives. What is left for them if they don't find real meaning and purpose in their lives – the kind of meaning that motivates and energizes them every morning?

I am wondering: Do we adults remember our own dreams? Do you remember yours? I would like to think we do and that somehow they are coming true.

Well then, let's keep believing during this century in which so many are saying that the “utopias” have come crashing down, that it is possible to have and share visions, ideals, and dreams. Let us continue to believe and to desire that after this pandemic will have finished that our world and our society will not just go back to pick up again where it left off, as though “regaining lost time”. I know there are things that we need to rethink, such as taking very seriously that our common home, planet earth, can “feel better” and “breathe more deeply” because it just returns to us what we give to it: life or stress. I want to dream and hope that we do not give up taking steps in favor of an ever more just society. I want to dream and I pray that the racism that exists in some parts of the world (and which is far more prevalent than we think), is disappearing.

I want to dream and wish that we will trust and believe more in our young people and in the generations that will follow us.

This is why I make the words of Pope Francis my own, “May I dream and help all those whom I meet dream, too.”

May the Good Lord bless you.

[1] A reference to the Greek mythological figure, Prometheus, who stole fire to give to mankind to enable it to become like gods, with their power.  The parallel with today’s mankind is that never before have we tried to play God as we do now – trying to control life and death and all manner of natural realities through the modern “god” of science – and, yet, a microbe has put the entire world on shutdown and man on his knees.